NSDockTilePlugIn for ScummVM on OS X

As you may already be aware, this year the ScummVM project is participating to the Google Summer of Code. One of the rules for students who want to participate with us is that they need to submit a simple patch against the ScummVM source code before they are accepted. Usually we direct prospective students  to our bug tracker for ideas on what they could implement. But now most of the bugs that are still open are not trivial to fix. So I was looking at the source code hunting for simple things to do when I found a TODO comment I left two years ago when implementing the TaskbarManager API on OS X.

What is the TaskbarManager API?

The TaskbarManager API allows interacting with the ScummVM application icon in the taskbar (or in the case of OS X in the dock). We have implementations of this API for several systems, but the only one that is complete is the implementation for Windows. In details the API allows to: 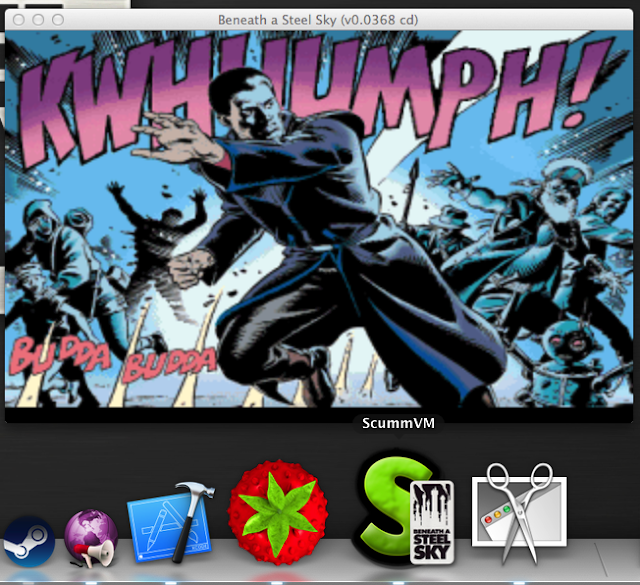 The last two were not implemented on OS X and the TODO comment was related to the last point. The idea was that we could provide a list of recently played games in the ScummVM dock menu and thus provide a shortcut to start a game quickly. I decided to take another look at this feature and wrote some bits of code to check that the idea I had hinted at in the TODO would indeed work. I then waited a few days in case a student wanted to implement this as part of his application to the GSoC. But today I finished implementing this feature, cleaned the code and pushed this to the ScummVM repository.

One aspect to consider here is that we want to customise the menu on the ScummVM icon in the dock when ScummVM is not running. That way we can propose a list of recent items in the menu and start ScummVM directly with a game. On OS X we can provide this feature with a plug-in that implements the NSDockTilePlugIn protocol. If an application bundle contains such a plug-in, the OS loads that plug-in when the application is added to the Dock. So there are actually two separate things to implement:

The TaskbarManager is part of the ScummVM application and when starting a new game the addRecent method is called. So what I did here was simply to save the list or recent games in a place where the aforementioned plug-in can find it. I decided to use the NSUserDefaults class to do this, which means the list is saved in the user preferences (to be precise in the ~/Library/Preferences/org.scummvm.scummvm.plist file).


That code is a bit too simple though. There are two main issues with it: the list can grow indefinitely and the same game can appear multiple times in the list. So let's improve the code that updates the array of games.

And that's it. We have this part fully implemented. After playing a few games the ~/Library/Preferences/org.scummvm.scummvm.plist file should look like this: 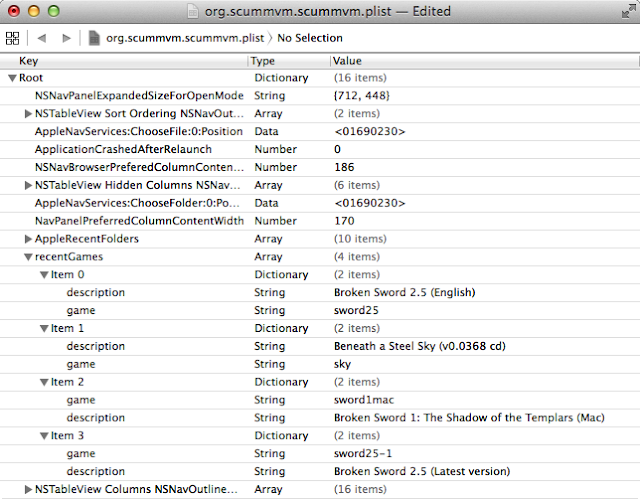 If you took a look at the NSDockTilePlugIn protocol documentation you will have seen that it requires implementing a setDockTile: method, and optionally we can implement a dockMenu method. We actually have nothing to do in the first one, so let's skip it and look directly at the second method.


Here we can note that I am using CFPreferences to read the list of recent games and not NSUserDefaults. Why is that? Do I need to remind you that this code is in a plug-in and not in ScummVM? That means we need to access the preferences of another application. Admittedly we could have used NSUsersDefault addSuiteNamed: to achieve this, but remember, we are implementing a plug-in and not an application. The plug-in is loaded by the SystemUIServer and using NSUserDefaults addSuiteNamed: would have changed the global preferences domain list for the SystemUIServer and not only for the plug-in.

The second point we can note is that the code above is using something called StartGameMenuItem. As you have probably guessed this is a custom class that derives from NSMenuItem. Indeed for each menu item I needed to store somewhere the game ID so that when this menu item is activated it can start the corresponding game. So I decided to inherit from the NSMenuItem class and store the game ID in the derived class. And while I was at it I also added the method to start a new game in that derived class. So here is what this class looks like:

Now if you add ScummVM to the dock, and after playing at least one game, you should see the list of games you played recently in the the dock menu like in the picture below. This provides a quick way to start one of those games. 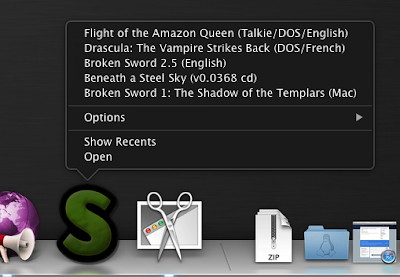 And here is what it looks like in action:

This is in my opinion the most useful of the features provided by the TaskbarManager API, so I am happy to see it finally implemented (I would have done it sooner if I had not forgotten about it :P).

Edit: Our buildbot uses an older SDK that does not support the NSDockTilePlugIn protocol. So nightly builds from our web site will not contain this new feature. You will need to compile your own version or wait for ScummVM 1.9.0.
Posted by Thierry Crozat at 17:00